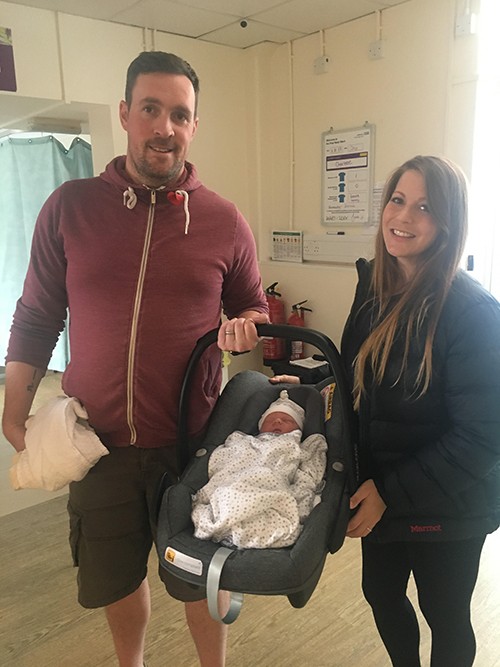 So I knew the date when I was going into labour which I was a bit bummed about.

It was a Wednesday and I had been really busy but I was concerned about the babies movement, I had felt a few wriggles but normally it was so active and this was different. I was worrying and so the only answer was to call up the DAU. They said it sounded like nothing to worry about but still to go in and get monitored. Sure enough as soon as we were in the car the baby started moving loads (typical!) but we headed for the hospital anyway. I was hooked up to the monitor and baby went crazy 😂 they then do their usual checks and she measured me. She said I was measuring big which I had been for a few weeks and suggested I have a growth scan the next day. I wasn’t too worried and actually was quite excited to see baby again, especially as if you have a normal pregnancy you don’t get scanned again after 20 weeks which seems crazy to me and an awful long time to wait!

The next day we went for the growth scan and sure enough baby was measuring big. 8lb 3oz at 36 weeks! They suggested we speak with a consultant and he came back and suggested I was induced at 38 weeks. I was gutted :( I had heard so many awful stories and to be honest it seems the general consensus when pregnant is to avoid being induced.

My main reasons were that:

And so...mission get this baby out naturally was on!!!!

Over the next 10 days I had loads of curry, went on loads of walks (so uncomfortable!), raspberry leaf tea, pineapple and yep!... even a little fumble which resulted in us crying with laughter! I definitely think this all helped leading up to D-day and signs of labour were there but baby was just too comfortable! What I also did in this time was come to peace with the idea of induction, practiced my hypnobirthing every day and also took time to write out positive birth affirmations.

October 30th arrived in no time at all and we were in hospital by 8:45am. I was nervous but positive and excited knowing baby was coming soon.
They started by giving me the first dose of pessary at 10am and then you have 6 hours before being examined again. They tell you to move around a lot so we went walking around the hospital for a few hours. I started getting mild period pain but nothing too exciting and by 4pm I could feel contractions but with only mild discomfort...I was on the ball reading my book 😂

I was pretty chilled and to be honest they felt much like my Braxton hocks had been. They reassessed me and said that due to regular contractions they could only give me 1/2 the dose again but again to keep moving and trying going up lots of stairs. The aim was to come back at 10pm with the hope I would have dilated enough (2-3cm) to have my waters broken. So off we went walking and in search of stairs. After going up and down loads I had started getting more discomfort with each contraction, I was having to stop and breath. We went back for dinner at 6/7pm ish, I had lost my appetite and was feeling a little fed up as I felt the contractions had slowed down and I was sure when I got reassessed that they would say no change. But fortunately at 10pm they broke my waters!! A very weird sensation but no pain which was a relief. (I found the examinations the worst part of all of it!)

Again their advice is to move around as much as possible. So off we went...I made it a few steps out of the door before I was soaked through and had to go back and change. Changed and dry(ish!) we tried for 2nd attempt... 2 steps out of the ward we stopped so Luke could go for a wee, he came out and I was stood in a puddle 😂 at this point I was running out of clothes and contractions had definitely begun so we made our way back to the ward. At this point the discomfort was definitely increasing so I decided to start using the tens machine. I didn’t want to peak too soon so only put on 2 pads and used a low setting. At 2am they said I could move to the pool room and they would assess me. If I was 3-4cm I would be allowed in the pool - if not I had to consider the drip. This was what I really wanted to avoid, apart from horror stories it would mean I couldn’t get in the pool!

At about 4:45am I was assessed and told I could get in the pool... it was such a relief, I was still using the tens machine and had just adjusted it to a little higher setting.
If I’m completely honest it was at this point things get a little blurry. I remember getting in the pool and the contractions increasing quite quickly. I’m not sure exactly how long I was in the water for but I soon asked to try the gas and air...again I didn’t want to peak to soon with the pain relief but oh my god it was amazing!!! For me it not only made me feel a little wasted, ha ha, but it meant in between contractions I was able to relax and kind of semi sleep between contractions and also channel my energy to focus on my hypnobirthing. I can not recommend this enough!!!

I must at this point give huge credit to Luke who was everything and more, he was calm and just kept reminding me of all the positive birth affirmations which meant I could relax in between and focus on breathing during each contraction. He even managed to eat a turkey and cranberry sandwich mid labour 😂 Although I agree the woman has to do the hard work I can’t imagine how tough it is for them to see someone you love in pain and literally be helpless, plus they are exhausted! (Remember they haven’t got all the hormones to help them through!)

The only things I remember after this are:

From here I hardly remember anything at all. I had a lot of blood loss quite soon after and everything is a bit fuzzy. The next thing I know is our families were there! Due to the blood loss (900ml) and my body not responding well to it I couldn’t actually get myself out of bed for ages without almost passing out. This was definitely not something I had anticipated, I think you prep yourself for the pain of labour but I hadn’t really considered how my body would feel immediately after. Luke again was amazing and pretty much stayed awake all night as I couldn’t get up on my own. We opted to stay in an extra night too just because I was still feeling pretty weak and sore! The midwives were amazing so it was nice to be able to ask questions and get reassurance.