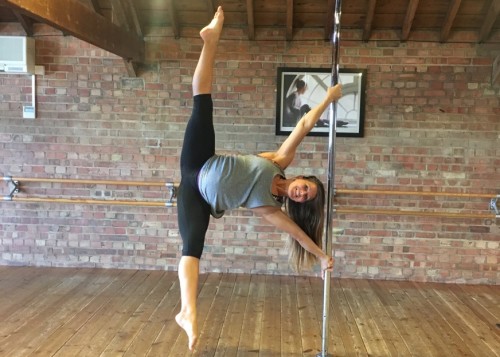 The first trimester, known as the period of time between 0-12 weeks, in some ways one of the toughest sections. I was fairly lucky I only experienced nausea I didn't have any sickness and my energy was still pretty good. Don't get me wrong I had a few daytime naps between classes here and there but definitely didn't suffer the way some do. In terms of my training, apart from scaling back the intensity and time I was training for, I continued as normal with the things I was actually doing. I would train for 2 hours at a time on pole, hoop and flexibility 3 x per week. I was running 1-2 x per week and also teaching workshops and performing at the weekends. I even had a photoshoot at 7 weeks pregnant and took part in a contortion workshops at 12 weeks!

Before I continue I think it's really important to say as soon as you see that positive pregnancy test you immediately have a response to protect your baby, there is no question of doing anything that could harm it. So if anyone is questioning whether its safe or not - just remember that! After suffering a miscarriage at the end of 2016 I was maybe a little more protective and perhaps scaled my training down more that I needed to in that first 12 weeks but that made me feel happy both mentally and physically. I had been training so hard for the last 4 years I was kinda excited for the break! In that time you literally are just counting down the days until that first scan....

I say 12 weeks but ours was actually in the 13th week and when we arrived baby was measuring 13 weeks 3 days so I was a little further ahead that we thought (or maybe it's a big baby!? We will find out in 10 weeks time!) We were mega nervous for the scan and I was so worried we wouldn't see a heartbeat but as soon as the sonographer found the little bean wriggling away and doing sumosaults I literally felt my shoulders drop and relaxed immediately. Unfortunately the sonograoher then turned around and said she was a little concerned about the nuchal fold measurement and she would like us to speak with the doctor. I can't really explain how I felt I just remember switching off and wondering why us...again! The nuchal fold is a measurement they take on the back of the neck, a high measurement can indicate a chromosomal abnormality like downs syndrome. The doctor explained the options moving forward which were to wait until 16 weeks to have an amnio (this is where they put a needle into the tummy to extract some of the amniotic fluid) or to have a CVS which could be done up until 13 weeks. A CVS is very similar but this time the needle goes into the placenta. Both have a chance of miscarriage. Now I am writing this I am thinking how do you decide, but at the time for myself it was a no brainer and I got referred for CVS immediately. We cried a lot and didn't talk much at all. It was one of the hardest things I have had to face. I had the CVS 2 days later privately as unfortunately the wait through the NHS was almost a week which I just didn't think I could bare.

One thing I never realised was what a waiting game being pregnant is. If you're not waiting to get pregnant you're waiting for the first scan, then the next appointment then the 20 week scan. You are just constantly waiting!

The first batch of results actually came back within 30 hours and at 5pm on Friday evening we found out that the baby definitely didn't have downs syndrome. Still to this day I can't give you an answer on what we would have done but I am grateful we didn't have to get to that point. We were told the next batch of results for any further abnormalities would take 10 days and so the waiting began again.

After the CVS I knew I needed to rest and so took 4 days off from teaching and training,unfortuately I was due to perform at pole theatre that weekend and I had to cancel. Hopefully next year! I went back to teaching and felt great. The next day I woke up and had had a little bleed. Immediately I thought...here we go again, I can't deal with anything else. I later found out this was due to my blood type and needing an anti D injection which I had a few days later and all was well. The plus was I also got to listen to the baby's heart beat which was magical!!!

As you can probably imagine my training took a backseat during this time and I began walking as much as possible. I was still teaching classes but using a student to demo in aerial and pole. It just wasn't a priority and even though training wouldn't have made any difference on the outcome it made me feel like I was doing all I could to protect my baby. We got the all clear at 16 weeks and that is when I really felt my pregnancy began. The next step was the 20 week scan, we had to have a detailed heart scan as well due to the high nuchal fold measurement and so the waiting began again.

I gradually began to get back into my training at this point and began running again once a week. I felt my confidence gradually increase with my pole training and opted not to do anything new or anything that connected my side or tummy with the pole. 4 weeks later we went for the 20 week scan and all was well :) We actually got so excited we went and bought our first baby bits!

From this point my energy was feeling good and I was back to some pole training. From about 20 weeks I started to experience SPD symptoms after running or walking for long periods time and so unfortunately the exercise intensity had to decrease once again. Pole was the one thing that didn't make it flare up and at this point I felt like a ninja....so much so I decided to perform at Pole World Festival in 7 weeks time....

My next Blog is all about my training leading up to this performance & how I felt after stepping on stage.