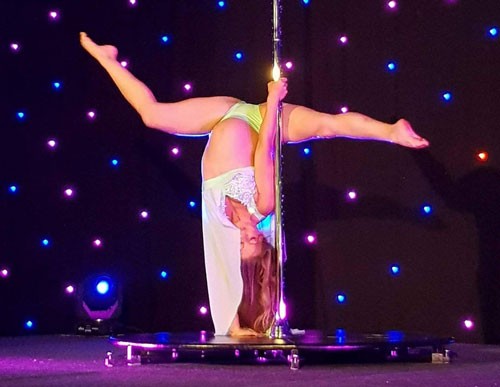 The decision to perform:

Before I dive in to this and incase you didn't read the previous blog it's really important for me to say I didn't take this decision lightly. At 24 weeks I decided to perform because was feeling so good!!!!

So Pole World Festival was coming up and the previous year I had loved performing at this event. The stage is really beautiful with all the fairy lights too ;) So I asked Gem Heywood & she agreed!!!! I was so happy, I already knew what song I wanted to perform to so the next step was contacting Fi Bourke for a costume. I was feeling pretty self conscious by this point and hadn't had my belly out in front of anyone (other than Luke and family etc) for a little while. It's the weirdest feeling but it was like looking at my body was looking at a stranger's. I kept repeating positive affirmations to embrace my bump and my ever changing physique but man thats easier said than done. See it's not just the tummy, I had started getting cellulite and just generally a bit more puffy round the edges, so I gave Fi the task of making me something beautiful but that covered me enough that I would feel confident stepping on stage. And of course she delivered! (see pics below)

The first draft of the routine had some really nice combos and transitions in and I was feeling really good about performing. There were even some tricks in there that I was still able to do...Phoenix, Pegasus etc. So now if you've seen the routine you'll be thinking....well what happened? Basically something I hadn't really considered in all of this was how sweaty you are when your pregnant. You have 50% more blood pumping round your body, your body temperature rises, it was the height of summer and I was pretty much just a sweaty blobby mess! So as soon as I started running the routine it was clear that somethings just weren’t going to make the cut...

The second draft had me taking the sweaty hands into consideration and I decided for safety reasons to eliminate all tricks that relied too much on grip. However by this point my belly was getting bigger and my SPD (symphysis pubis disorder) had started playing up, even climbing was getting uncomfortable. I literally felt like every time I went to train I had something new to contend with...it was amusing and frustrating!!!! My energy was feeling a little low too and I was also starting to worry about performing at the end of a long day.

As the festival drew closer I had a finished piece, well just about. I had a whole team of helpers on my Live love Bend stand and was lucky enough to have Jade Bensilum to assist me during workshops. This all really helped me through the day. The day was awesome, I literally love events like this and seeing all my pole friends. I taught a Stretch workshop and a seminar on competition training in the morning followed by my tricks and flips workshop later in the afternoon. I then managed to have a couple of hours to sit, chill & eat :) and prep for the evening show.

I've always been a nervous performer and get nervous for performances as well as competitions. Over the years I've managed to channel my nerves to excitement and that has really helped me enjoy the moment rather than stress out. At PoleX I was nervous about a few things;

Starting with no1. I can now assure you that adrenaline doesn't work quite the same way when your pregnant! After a long day, no caffeine (I decided to give up as soon as I found out I was pregnant) and with a body that didn't feel like mine anymore I was kinda relying on adrenaline for the last 1/2 of my routine...the end couldn't come soon enough and I actually took out my last spin because I knew I wouldn't have been able to execute it.

No2. I have never been one to suffer with sweaty hands on stage but sure enough no dry hands in the world could have helped me!

No3. obviously this is something you can't control and so therefore its not really worth worrying about but during the day I spoke with various people and I could tell there were mixed feelings about me performing. My goal was to showcase that moving while pregnant is OK! As long as your listening to your body. I hoped to show people that I was working at a lower level but it didn't mean I had to stop completely! Luckily the response was amazing and I received so many kind words after.

& 4. Again this one is a silly one to worry about, but I never considered how much of a head **** the changes in my body would cause. One second I would be loving my bump and just amazed by the human body, the next looking in the mirror and bursting into tears. Thank god for Fi Bourke!!!! The costume she made was beautiful and exactly what I needed for a little boost to get me on stage.

I am so happy. I love pole, it has been my life for the last 5/6 years and given me some of the most amazing experience, opportunities and friends I could ever imagine. To be able to add this event to my story is truly a blessing.

Don't get me wrong though, after it was done I was also very happy (ha ha) I was ready to begin the wind down and started with a holiday 2 days later!!